Mauler in the Middle, 9 Lives of a Redfish 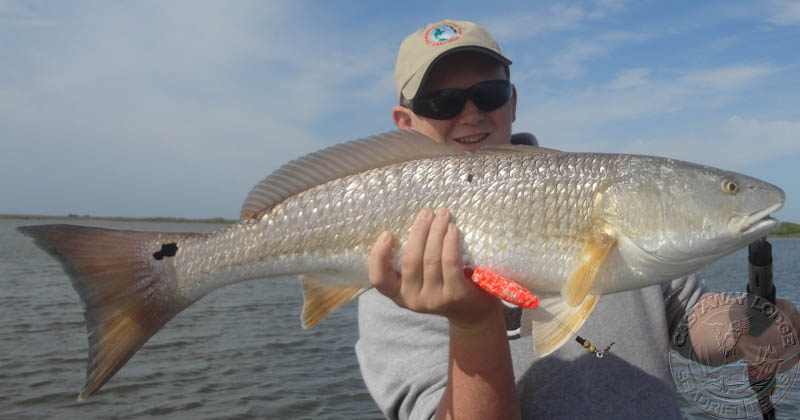 Water levels fell out after the mild mid-week cool snap. Redfish dug in to fall out pools and swales in shallow back marsh lakes and bays while Black Drum skidaddled to the comfort of deeper lakes. Trout action took a dive for us post front while the overall catch rate seemed to rise with more undersize fish. Longtime guests of Ron P. hit the water hard on Thursday with puffing NW winds and Norm lit up the first keeper Trout of the day on the first cast and it was great to see the guys on the water again. On Saturday, We welcomed Brad S.(aka Skuff Daddy) and Kelly along with their son Kamo in for another trip. On the first go around, solid slot Black Drum were bending the rods at will with Redfish being more elusive. On the return visit, the fortunes on the water had changed with bruising Redfish taking center stage. 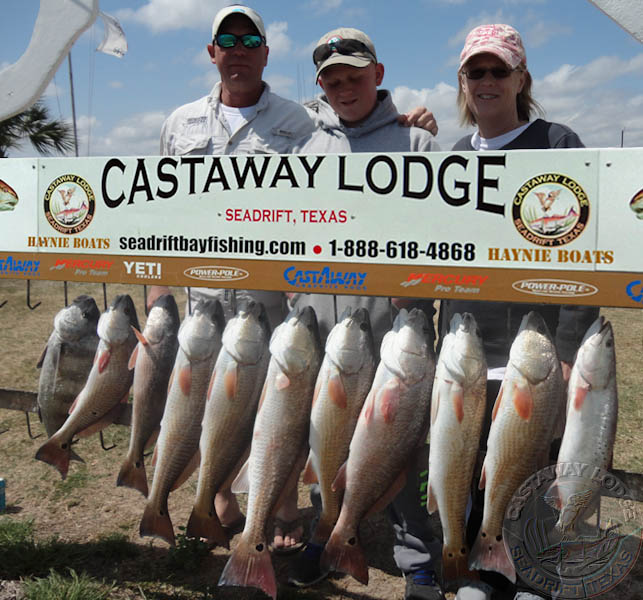 Brad and his son Kamo were talking some smack at the lodge the night before the trip and there was a healthy dose of competition going on. Sure enough Skuff Daddy bowed-up on two solid bruisers right off the bat shaking little Skuff up a bit. As we were fishing we looked up and saw a Mansfield Mauler pop up 20 yards from the boat. I said "I bet that there's a fish on the other end of that". Sure enough, the Mauler started moving a bit like a scene with the barrels in the Jaws movie. The Mauler slowly went below the surface moving forward and it dissappeared for a bit. I looked up and saw the Mauler surface near Kamo's bait and I said "Kamo, get ready". In an instant, the Mauler slid beneath the surface and Kamo rared back with a huge bow-up. With drag burning, Kamo was working the rod to it's full potential and you could tell this young man had fished a plenty. The fish was uncontrollable and it made the worst move taking him all the way around the airboat, over the cage, around the Power Pole and came charging toward the bow shooting underneath the boat. Finally, the bruiser gave in and came to hand. At 31", Kamo had man handled the top predator of the skinny waters with poise. Brad and Camo decided to release the fish. I inspected the Mauler rig and found a small lead head jig embedded deep in the crushers. I removed our hook from the lip and clipped the leader line leaving the deep jig in place. We eased the fish over the side to fight another day. That's one lucky Redfish for sure.

We moved on from there taking solid mid to upper slot Redfish to full limits. Black Drum were much more elusive and I saw very few on the flats that day. We came across one school on the edge of a deeper lake and managed to catch one while missing a few along the way. All in all a great day with some great folks.

Looking For Calm Ahead

Spring Break Set Up For Success!